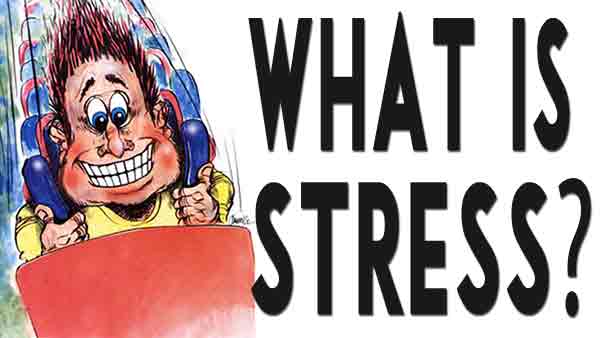 Mass media, magazines, TV shows, books, all talk about modern day stress in terms of something horrible, something unnatural and unwanted.

We refer to stress as us being ‘stressed out’, ‘under stress’, ‘overstressed’, or having a ‘stressful’ day with the kids or at work.

The original definition of stress is a concept from physics meaning “pressure or tension exerted on a material object”.

When constructing a skyscraper, engineers must calculate how much stress the building is might need to endure.

This type of stress is measured in terms of units of pressure. This understandably leads us to assume that stress is a force exerted from the outside of our bodies, by outside sources.

Simple Definition of stress from the Merriam-Webster dictionary:

Stress is not caused by external events, as much as we’d like to think.

Stress is a feeling that’s created when we react to particular events.

It’s the body’s way of rising to a challenge and preparing to meet a tough situation with focus, strength, stamina, and heightened alertness.

I’ll give you an example in a little while.

The events that provoke stress are called stressors, and they cover a whole range of situations — everything from outright physical danger to making a class presentation or taking a semester’s worth of your toughest subject.

The term stress, as we are thinking about it here, comes from an Austrian-Canadian scientist called Hans Selye.

In 1936 he defined stress as “the non-specific response of the body to any demand for change”.

These two elements have many areas in common when we talk about the older psychological concept of anxiety, which we’ll look at further in the next video.

Later in life, Selye told reporters that “Everyone knows what stress is, but nobody really knows.”

And therein lies the problem.

So What is Stress Then?

So without a concrete definition to work on, what are the core characteristics that I’m going to work from?

We’re talking about stress being how you respond, physically, logically, and emotionally to pressure being exerted from the outside.

So pressure to conform with other people who are still drinking.

Pressure from people who want you to stop.

Pressure from your bank account, your health, the time being wasted, and so on.

It can also refer to how you respond to pressure that you’re exerting on yourself from the inside through your self-talk, your expectations, and so on.

For instance, telling yourself you can’t do it or trying to quit drinking alcohol, quit smoking, and lose weight all at the same time.

When you quit drinking, smoking, or try to overcome any other bad habit, you are going to go through a period of discomfort.

How much discomfort you go through depends a lot on how much strain you are concentrating in that area of your life.

Stress, as we’re going to view it from the standpoint of this course, is internal, as we’ll look at in a moment and in some of the upcoming videos.

It’s not the external pressure that is causing the stress, it’s your reaction to that pressure that causes what we tend to think of as stress.

That’s an important distinction to understand as we go through the rest of this course.

The tools I teach here on Alcohol Mastery boil down to helping you to figure out what is in your control in the first place.

If you don’t feel something is in your control, I want to help you to examine your alternatives about what you can do to discover or regain control.

Often all that takes is a change of thinking.

It’s often as easy as looking at things from an alternative perspective.

That alternative perspective then opens up a whole new avenue of actions that you can take, giving you more self-control.

It’s not the external pressure that is causing the stress, it’s your reaction to that pressure

We’re going to look at this topic in much more detail in later videos, suffice to say here that it’s hard to give a definition of stress in general because everyone feels stress and deals with stress in different ways and with varying intensities.

I want to give you an example of how stress is internal and how different people handle the same external pressures.

Our example looks at a rollercoaster ride, or more specifically at the passengers on that ride.

Some people are loving every minute of the ride.

They are hooting and hollering, some with their arms stretched high in the air.

They are the thrill-seekers and will almost always try to get into the front seats for the best view.

Then there are other people who are petrified.

They are holding on for dear life, their knuckles white from the strain.

They may even have their teeth clenched and their eyes shut.

They are likely to be found towards the back of the line. Between these two extremes, there are many other types. Some find the ride just fun.

Others find it boring.

What is it that separates all these people?

The sense of self-control.

The ride is the same for each passenger.

No one person has any more control than the next person.

So the external stressor is the same.

It’s the perceptions and expectations that separates these people. The people at the front perceive the whole thing in a different manner than ones at the back.

They expect to have fun, to have a thrill.

While the ones in the back might be having nightmare visions of themselves being thrown high into the air.

The stress each person feels or doesn’t feel is all internal.

Now I’m not saying that you can deal with stress by merely changing your perceptions or expectations, that’s not very practical.

But you can learn more self-control.

You can learn to handle your reactions to stress.

That’s what this course is about.

So in this video we looked at a couple of definitions of stress, none of which are entirely satisfactory. For the purposes of this course, I’m going to use the core definition of stress as being your internal response to any outside stimuli or stressor.

In the next video, I’m going to take a look at the question: What is anxiety?

“Take rest; a field that has rested gives a bountiful crop.” Ovid

Listen to the Audio

Until next time…
Onwards and Upwards!

PLUS: Whenever you’re ready… here are 3 ways I can help you stop drinking alcohol and begin your new Epic Journey!

2. Join us at Habits Unplugged Let me take you through an epic journey of change and transformation. Breakout from the prison of alcohol hell and build a life you never want to escape from. Get more details here: https://alcoholmastery.com/habits-unplugged

3. Work with me One-on-One If you’d like to work directly with me to stop drinking alcohol… just send me an email to kevin@alcoholmastery.com and put “One-on-One” in the subject line… tell me a little about yourself and what you’d like to work on together, and I’ll get you all the details!

We have lots of quit drinking alcohol courses, audiobooks, books that will have a profoundly positive impact on you and your new life. Click on the button down below to go to our store and get started.

Take a Trial of Our Habits Unplugged Program for Only $1!