On the site this week

I put up a link for you to download the progress chart. It’s in the sidebar on the right hand side. If you want to download the poster, left click on the image. When the image opens, right click on that image and click on the save image as link and save it to wherever you want to store it on your computer. I think on the mac it’s save target as… could be wrong… I’m not a macman, I got that from Google… You should also be able to right click and drag the image to your desktop if you’re on a mac or later versions of windows.

I want to add a new category to the website this week called “No Excuses”.

The idea is to make a series of videos about all the excuses we make, not only the ones that prevent us from quitting drinking, we also use many of the same excuses that stop us from achieving in the rest of our lives. It’s something that I am in a constant battle with. I am trying very hard to listen to what I’m saying to myself – which should be easy right! – and catching myself in the middle of an excuse.

I plan on doing one or two videos a week, so it’s not going to be built out overnight. But eventually, I hope that it can be built into a vital part of the site.

What About Making Excuses

Making excuses is something that so many people do all the time, usually its about why they can’t quit drinking. For the most part, we are just rationalising past ourselves because we don’t want to put up with the discomfort or we really don’t want to give up our crutch or our enjoyment.

Some of My Favourite Excuses

Some of my favourite drinking excuses used to be:

“I love drinking and I don’t want to stop”

“It’s in my culture to drink”

“It’s not the right time to stop”

“Where’s the harm in a few pints”

“I don’t need to quit, I can moderate”

Where Excuses Can Lead

If you carry on making the same excuses, over and over, you will eventually believe them to be true. They will become true for you, a sad part of your reality. Excuses stop you from doing the things you need to do in order to move forward with your life.

They make sure you take the short cut all the time. Excuses lead to taking the easy way out, immediate gratification. You take the easy short term route which will lead to hard long term consequences.

What Can You Do About Your Excuses

The first thing you have to do is face the facts that making excuses is just another bad habit. And because its a bad habit, it’s something you can change.

Like any other habit, change is not something that is going to happen overnight.

You first have to become aware of what you’re doing. Once you’re aware, you’re more likely to spot an excuse when it happens. Once you spot that you’ve made an excuse, you adjust your thinking and your behaviour.

Any significant change happens in small adjustments. Eventually you’ll spot an excuse before it has time to breathe, then you can cut it off before it can do any damage.

Anther tactic you can use is to think about the thousands, the hundreds of thousands, of people just like you who’ve had the same excuses and still they’ve managed to quit drinking for good. Everyone has too much stress, not enough time, or they don’t know where to start.

Hopefully this new section on the website will provide you with a boost up the arse if you’re thinking about excusing yourself from doing the hard work that’s needed, I hope it works for me that way, and that making these videos will help me to overcome some of my most plaguing excuses.

If you take action to avoid your excuses you’ll take the short term hard route now and the easy route in the long run.

Keep thinking about what you’re thinking, looking for the telltale signs that should sound an excuse alert, then you can deal with it. Think about the many people that have quit drinking before. Ask yourself “Is there anyone out there who has had my excuse, but they’ve stopped drinking alcohol anyway?” 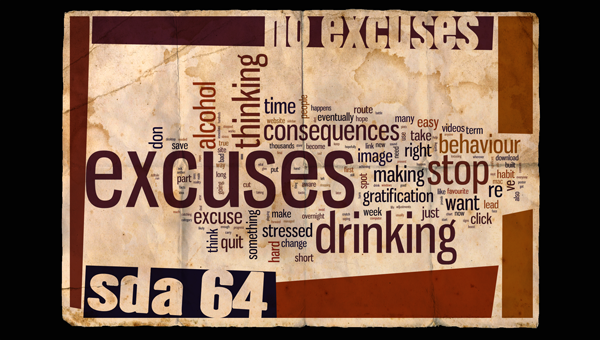