This is Kevin O’Hara for Alcohol Mastery and I got an email during the week from somebody who wants to remain anonymous, but they gave me a mission to read the email out and I said I’d do an answer on it with a video so, I’ll just name the video “Quitting drinking with anxiety, sadness, stress, headache, foggy mind, fatigue and irritability.” So, he starts out:

“I’ll have you know that I’ve stopped drinking for almost two weeks now. Unfortunately, I fell back again last night for reasons I’ll share with you in a moment, but I want you to know that at the same time, I will be continuing my commitment to picking myself up and staying the course.

“My one major concern and fear is one only. As I quit, I started off fine; woke up fine, felt fine, then came this week – I felt a lot of anxiety, sadness, stress, headache, foggy mind, fatigue and irritability. It makes me feel like there might be something wrong with me in my life, while in reality, everything is going fine for me.

“My question is, is this part of the withdrawal process? If so, how long does it last? I became so afraid, I’d quit before in the past. The most 5 months, but I don’t remember going through this. The only thing I went through was a headache that lasted a while until I started back up again.

“Kevin, I really want this out of my life. I want to know that as I stop, that these feelings will eventually subside and that I will feel at ease like I once did before I ever started drinking. Did you go through all of that? And how long did it last? What did you do to keep going? And how did you feel at ease?”

So he sent me an update and he said:

“Currently, I’ve been sticking to my commitment to quitting alcohol with the exception of that one day that I fell off the wagon. I’ve been drink-free for 23 days. I’m taking this very seriously. Although I am happier without having to be brain-drenched in booze or feeling the terrible effects of it the next day, my anxiety has been coming and going. I also get heart palpitations from time to time, but it’s usually from drinking coffee. However this is something that I think has a lot to do with me quitting the liquor – I really hope I am wrong.

“Will these feelings ever go away? I get nervous about thinking about these things from time to time. I wanna be normal forever. I’m willing to quit forever in order to get that normal state of living. Will it happen?”

So, I did the answer to this question when I was out walking earlier on, so here it is now:

No two people are gonna be unique in this way.

I think the thing that generally sticks out for everyone, the thing that seems to be the same for everyone is that everyone expects, when they quit drinking, that eventually they’re gonna have this Nirvana moment. And it just doesn’t work like that.

I think for most people, we’re just gonna have these see-saw motions up and down. You know a see-saw is – I don’t know what they call it in America. It’s like a roller-coaster sort of thing, you know the kids’ playground thing where it’s up and down – dips and drops. The ups and downs, it’s really what it’s all about. It’s really what we all experience. It’s just like that.

The great news is that eventually, all your withdrawal symptoms will fade. They’ll just eventually disappear and you won’t feel them anymore.

How long that’s gonna take for you?…

I don’t know. It all depends on the person, the individual person.

And by fade, I don’t mean that in the sense of turning down your TV and everything gradually and gradually gets less and less.

I think what happens at the beginning is that your symptoms are – those ups and downs – are very close together.

It’s like what I was saying the other day about the habit memories – now they happen so seldom that they surprise me when they do happen.

It surprises me when I get a big craving like that. That’s just the way it works and you have to accept that.

I’ll give you an instance from my own personal experience. One of my biggest symptoms was I couldn’t sleep at the beginning. No matter what I did I just couldn’t sleep. I mean by sleeping, I mean drifting off and getting a good night’s sleep and actually going to sleep for a few hours.

I’d fitfully sleep, I might drop off for minutes but I never felt like I was fully asleep if you know what I mean.

And then I’m not sure how long into the quit – probably day 5 or 6 or 7 or something like that – I got a really good night’s sleep and I felt like I’d turned a corner.
I felt like that from now I was gonna be able to have a great sleep. In actual fact, the next day it went right back to normal again. I just couldn’t sleep again.
So, it carried on like that for maybe 30 days, or just over 30 days. And then eventually I was sleeping more than I was not sleeping. I was still having the odd fitless, restless night, but they were fewer and far in between.

Do I still get restless nights? Of course I do. Everyone does, and I just don’t attribute them to quitting alcohol anymore. There’s a lot of other things, there’s restlessness, there’s being overtired, there’s eating too much food, not having enough food…how many different reasons is there you know, but at the beginning you know what’s happening, because you’re quitting.

I’d really love to say, to tell you now that my life is just a big bunch of roses, That there’s no problems and no issues, but it’s a crock. Everyone has problems.
I don’t know anyone that has got their life that sorted out that there’s no issues.
I mean, a lot of the time a lot of the issues are hormonal. It’s all this stuff that’s just outside your control that you just can’t do anything about that’s gonna cause problems.
And people give me headaches sometimes, it just depends on the person. Everyone knows somebody that is capable of stirring up a big bad headache in them just by listening to them.
It’s just life.

The thing about it is that my life is much, much more in my own control now. I don’t feel like my life is being swished around like beer in a beer bottle.

Your body and your mind just want to be stable – they crave that stability, so your mind is going to do everything it can to try and bring that stability about.
Really, you’ve just started to get control back of the mothership.
You’re getting your body back.
You’re getting your mind back.
You just have to ride it out, and let things happens.
Let things happen that are gonna happen and that are out of your control.

Allow for Healing to Happen

A week will go by and you’ll be stronger in a week. A month will go by and you’ll be even stronger. Six months, the same thing, you’ll just keep getting stronger, and stronger, and stronger. And the whole point is that you will build strength upon strength upon strength and that’s where your ultimate momentum is gonna come from – is the strength and the courage that you build in those first few days and first few weeks of quitting alcohol.

So I really hope that gave you some push forward and I hope it gives you some encouragement that things will work out for you.

So really just keep it up and keep watching the videos.

If you have any more questions just shoot me an email, and I’ll either try to answer it or send you to one of the videos we’ve done already or I’ll answer it on a video. So, whatever.

Until next time! My name’s Kevin OHara for Alcohol Mastery. 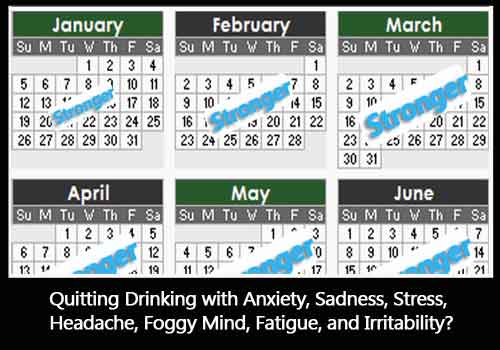