Alcohol is alcohol, nothing more, nothing less.

It’s the same argument that many people use for the banning of guns or knives, that they are evil. When someone shoots someone else, you can’t blame the gun, you can’t say it was the guns fault. It was the intention of the person to injure or kill another person and their method of doing it was with a gun.

It’s the same with alcohol. It just happens to be the drug of choice for so many people. It is a means to an end, a tool that people use to get from A (sober) to B (drunk).

Guns don’t shoot people by themselves, knives don’t mysteriously fly through the air on their own to impale their victims, and alcohol doesn’t get into your body by itself … you have to drink it. Alcohol on it’s own cannot make you drunk, give you a hangover, ruin your life or the lives of those around you.

Alcohol cannot do anything on its own. You have to put it into your mouth over and over again for any of the above to happen.

I think the notion of that alcohol is evil, that there is such a thing as the demon drink, just adds to the helplessness you might feel if you are trying to stop using it. If you think about it like it has this massive power over you, that it is the spawn of satin, that’s exactly what it will have over you, huge power.

By amplifying alcohol into something enormous, you place it on a high pedestal. You give it massive power over you. All it takes is one drink and you’re right back where you started, its got you in its powerful grip once again.

You are much better served to think about alcohol in terms of how your using it is affecting your life. 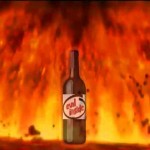