How Do I Know If I’m Drinking Too Much Alcohol?

Am I Drinking Too Much Alcohol?

What You Will Learn In This Section:

How Much Alcohol is Too Much?

What are the official sensible drinking guidelines?

Drink anymore and you’re drinking too much.

You can’t carry them over, save them up for the weekend or a special occasion… if you don’t drink them today, they’re gone, you can’t have double tomorrow!

What Are The ‘Safe’ Limits?

What about the Safe limits? What safe limits! That’s the biggest load of bollocks ever.

The drinks industry in general will bend over backwards to ‘push’ their product as being cool and glamorous.

Then they’ll shift the blame for overdrinking to you. ‘YOU’ must take responsibility for YOUR drinking, while all the same time making it as widely available as possible, at a low cost, and to an ever widening audience with a growing youth exposure through alcohol marketing and advertising (brightly colored lemonade type drinks with juvenile names like “alcoPOPs”)

Why Are There No Safe Limits?

Do You Have a Drinking Problem…?

If you have to ask the question, “Am I drinking too much alcohol” then you probably are.

Are You an Alcoholic?

I wouldn’t class myself as being an alcoholic. I think I lost control of my drinking a long time ago, but only in certain situations. I would ‘go drinking’, not go out for a meal and a drink, just for the drink, and lots of it. Once I started, I found it hard to stop…or once I got it into my head that I was going drinking that day, not many people could talk me out of it.

Use the Johns Hopkins test 20 questions as a starting point to find out if you have alcohol problems.

How Do You Behave Around Booze?

I think all drinkers have had one of those mornings when they’ve thought “Oh My God, what did I do or say last night!”
The problems arise when serious and often life changing decisions are made whilst under the influence.
These can include having unprotected sex, becoming aggressive and getting involved in vandalism or fighting, taking other drugs, or deciding you’re ok to drive the car after all.

What Type of Drinking Do You Do?

Are You Noticing Any Physical Symptoms from Drinking Too Much Alcohol?

Heavy drinking can affect all your major organs including your skin, brain, kidneys, liver, stomach, intestines, and heart.
The symptoms of damage caused by drinking are many and include:

Are You Noticing Any Mental Effects from Too Much Alcohol?

Being dependent on alcohol can lead to serious effects on your brain.
Many people reach for a drink because they want to change the way they are feeling.
Unfortunately, alcohol can change the way you feel permanently, causing massive mental health issues.

Long-term abuse can lead to:

How To Know If You Have A Problem 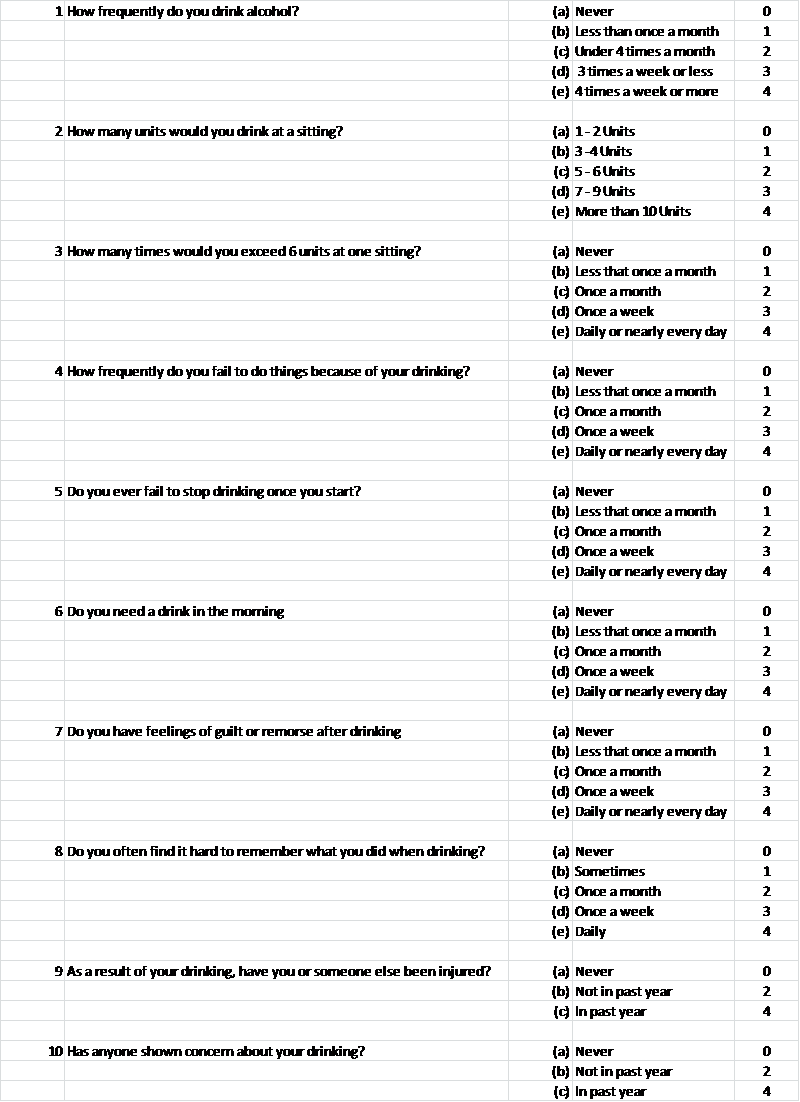 Answer all the questions truthfully.
Choose only one option per question, add the values for each option to find your total score.

Your score reflects the lowest risk for drinking alcohol.

Your score reflects an increased risk of developing problems related to alcohol, and you should try to cut down.

Your score reflects that you are already having problems related to alcohol abuse. You should cut down on your consumption and have a pay a visit to your doctor to see what options are open to you.

Learn How to Say No! see this post
If you find it hard to say no to a drink, we published a tutorial that will help you out. Using the PASS method, you’ll never have to worry about saying no again…just because you’re not drinking it doesn’t mean you can’t enjoy yourself!

To be on top of what you’re drinking and how often, you should keep a drinks journal.
Download a drinks diary from the UK’s National Health Service.

Are You An Alcoholic – 20 Questions…

You should also take a look at our post on the Johns Hopkins Hospital 20 Questions: Are you an alcoholic…

There’ll also be articles and videos about each question…just follow the links on the page for full details.

I grew up in England and Ireland, two countries where often the center of community life is the local bar or pub. That’s great until you have an alcohol problem, then the local publican becomes your local dealer.

When I first started drinking in pubs, at 18, a mate used to brag that he could drink 10 pints and slag me off because all I could drink was 3. If I drank any more than that, the room would start spinning and I’d feel like throwing up.

He was the same age as me, but belly-wise he was much bigger. He was comfortably able to drink 10 – 12 pints and he’d call me a sissy as soon as I started giggling or showing signs of getting drunk.

I’d try to defend myself by saying that it cost him four times as much to get drunk as it cost me. But, secretly I was really envious of him. He was a jack the lad, a real man; whereas I really thought I was really a bit wimpish.

When I first started drinking it tasted bloody awful, how the hell could anyone drink this slop? It’s an “acquired taste” as the alcosnobs would say, I’d soon get used to it. And how could I call myself a man and not drink.

Before I gave up, there was no such thing as going out for a pint. It always had to be at least four or five. And if I was going out to drink, I was gonna drink. I’d easily go through a dozen, sometimes twenty or more depending on how early we started.

I’ve known I was drinking too much for a long time. I just didn’t want to admit it. It still had that manly image in my mind. I was being an idiot all those years. Instead of standing up for myself, I allowed myself to get bullied into drinking and smoking, pure stupidity and cowardice!

It’s only when I really thought about my drinking, how I used alcohol, that I realized I’d never drank for the taste. I drank to get drunk!

The human body is just not meant for that kind of treatment.