Why Does Alcohol Withdrawal Kill You?

Why Does Alcohol Withdrawal Kill You? (Transcript)

I’m Kevin O’Hara for Alcohol Mastery and today I want to ask the question:

“Why does alcohol withdrawal kill you?”

Really, the answer is: it doesn’t kill you!

Now take out the “withdrawal” and just type in “why does alcohol kill you” or “deaths from alcohol”, and you will come up with tens of thousands of attributed deaths every single year. In America, in Europe, all around the world. Now I’m not a doctor, so I can’t give medical statistics to back up what I’m saying. But anybody who can type can go into Google and see what I’m saying is true. There are enough statistics to fill up the Encyclopedia Britannica.

Death By Alcohol is Difficult

Am I saying that nobody has ever died from alcohol withdrawal? No, I can’t say that. But I also know that people have gone to sleep and died in their sleep for no apparent reason. Young people who’ve just gone to sleep and drop dead. I also know that when somebody is a pure alcoholic, when their whole life revolves around alcohol and they get up in the morning and the first thing they do is reach for a drink. And their whole existence is about drinking…When they die, the doctor or whoever is going to sign the death certificate is going to assume that it’s caused by alcohol.

Where Lies The Truth?

Now nobody can tell me that a person who spends their whole life drinking and the only reason they get up in the morning and they’re still breathing is to drink has been a paragon of virtue in every other aspect of their lives. They’ve watched the nutrition and they’ve made sure that they get a good night’s sleep and exercise – they haven’t done any of that. So they’ve driven their body into the ground in more ways than one. The alcohol is going to be a massive factor that’s probably caused everything else. It’s probably caused them not to look after themselves. But, was it the withdrawal that killed them? Or was it the fact that they had complete vitamin and mineral deficiencies? I know it’s going to be put on the death certificate, that’s for sure.

Drinking Alcohol vs Withdrawing from Alcohol

Onwards and upwards!
Thanks for visiting the site.
Until next time…
Onwards and Upwards!
Kev 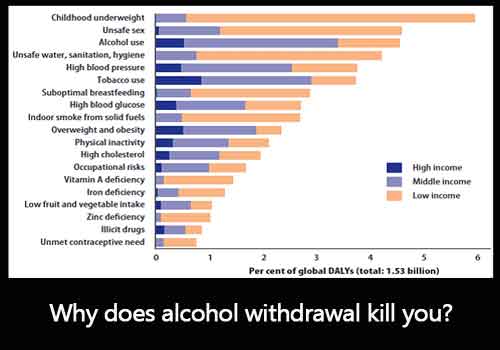 How Has Your Life Improved Since You Quit Drinking Acohol?
Will Quitting Alcohol Cure Your Depression?
Quitting Drinking And Going To Bars or Clubs?