Why Do Hangovers Get Worse As We Age? – Stop Drinking Alcohol 65

Why Do Hangovers Get Worse As We Age?

There are many reasons for hangovers getting worse as we get older.

One of the basic reasons is the liver is not up to the same job any more. The basic functioning of the liver is dependent on the production of various enzymes which, like everything else in the human body, become scarcer as we get older.

If you look for information about alcohol and the liver, you always hear about the amount of drinks per hour (one) or the number of units per hour (one again) that can be metabolised by this vital organ.

But if we look at the evolutionary functioning of the liver with regard to alcohol, it has evolved to deal with a couple of different, naturally occurring alcohols. The human liver has not evolved to deal with the refined assault that the modern drug user puts it through.

The first type of alcohol that the liver has evolved to deal with are the alcohols which naturally occur in our bodies, through a process known as endogenous ethanol production.

You eat, the food goes into your stomach, and your friendly microbe population gets to work helping with the digestion process. One of the waste products of that metabolic process is alcohol, small amounts of alcohol.

Another way you can get natural ethanol into your body is by eating fruit that’s over-ripe.

Although humans probably used to get ‘drunk’ by consuming this type of fruit in our past, and some humans and animals still do today, there is no way of getting addicted by consuming alcohol in this manner, nor is this type of alcohol consumption going to cause any significant damage to the body.

This is because of the pretty narrow time frames involved.

Fruit is seasonal, so it’s only available at certain times of the year, and there would be a matter of days between the fruit being ‘overripe’ and inedible.

As we age, our liver has much less ability to deal with alcohol as it used to. This is mainly to do with the enzymes involved. The availability and strength of these enzymes dwindles the older we get.

Dehydration is one of the big factors in what causes a hangover at any age. The older we get, the more dehydrated we are naturally. The more dehydrated, the less the system can dilute the alcohol, the more long term damage and the worse the short term hangover.

As you age, your sense of thirst lessens, your kidneys don’t hold onto as much water any more, and then you add the diuretic effect of alcohol to further complicate the issue.

As we age, our bodies change. We lose muscle and gain fat. Because of this, we feel the effects of alcohol more. Muslce absorbs alcohol so there will be less swimming around in the blood.
Fat cannot absorb alcohol which means there are higher levels in the bloodstream. Also, we tend to shrink a little, losing overall body mass. This concentrates the alcohol even further.

Another element that tends to change as we age is our metabolic rate. We slow down with aging and so do our bodies. That means any alcohol is going to be in our bodies for longer, causing rougher hangovers in the short term and more damage in the long run.

As we age, we spend less time in the deep and restorative part of the sleep cycle. This means we don’t get enough rest. Unfortunately, it’s another area where alcohol adds to the problem, which adds to the bad hangover.

Other Causes If Worsening Hangovers

Another cause for worsening hangovers as we age are the mix of alcohol with prescribed drugs.

Older people are also less able to handle the mental aspect of hangovers. What seems like a walk in the park for the young, can seem like hell as a person gets older. The hangovers not only seem worse, they last longer.

I think most older people who are drinkers will attest to most of this. I certainly remember the after effects of my alcohol use getting worse and worse, the older I got. The bad feelings would last for two or three days, and as I’ve said before, if I hadn’t stopped using alcohol, I could really see myself using the drug ealier and earlier in the day, just to combat the horrible hangovers.

Let me know if you’ve any bad hangover stories. 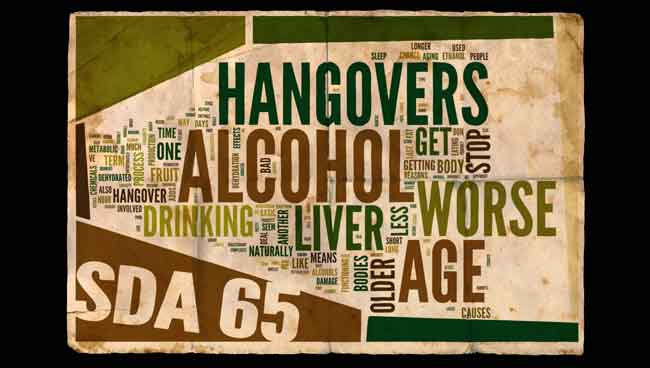