Who Is To Blame For Your Drinking?

Who is to Blame for Your Drinking (Transcript)

I’m Kevin O’Hara for Alcohol Mastery and today I’m gonna be talking about who is to blame for your drinking.

So basically we’re completely in charge of designing our own life. We’re the architect of our own life. And we do that by making the choices that we make in the moment. Sometimes we look at those choices and we don’t really like the choices that we made or we don’t like the result. At this point in time you’ve got a decision to make; you can either look outside, look around you and see if you can think of something or somebody outside of yourself that’s basically caused all your problems. Or, you can look inwards for the culprit. You can start to look at yourself and once you start realizing that you’re the culprit, you’re the one, then you’re gonna start having the best years of your life. That’s when your destiny truly and really becomes part of your own making. You’ve put your destiny in your own hands.

Who Do You Blame?

You really have got to take personal responsibility for your own drinking. Once you start going down the blame-game route, you start saying, “I’m blaming my parents. It’s my parents’ fault. They raised me up in a country where there’s drinking.” You blame your country, you blame your little brother ’cause he was such a little bastard. Once you start doing that, then you’re starting to deflect the blame away from yourself.

Were You Brought Up Wrong?

Is The Alcohol To Blame?

Another thing you can’t blame is the alcohol. The alcohol is just an inert substance. It can do nothing to you unless and until you pick it up, put it in your mouth and swallow it down. It’s the same thing as a kitchen knife. It’ll just sit there on the counter, rotting forever, until somebody picks it up and does something with it. It can’t jump up and stab you in the heart all of its own accord, but you can do that to yourself. You can pick it up and shove it into your heart, and it’s basically the same thing what you’re doing with alcohol. It’s just that you’re doing it over a much, much longer period of time.

There’s No Life There!

If you take out a bottle of scotch, take the cap off the top of the bottle of scotch and you leave it there on a countertop, or a table top or on the floor, and it will basically stay there until it evaporates into thin air. It won’t do anything, it won’t go out for a packet of sausages. It will stay where it is. It can’t go anywhere, it can’t do anything, it has no life of its own. You have to physically pick it up and pour it into yourself before it can do anything to you.

People even blame the alcohol for getting them drunk! It’s not the alcohol that’s getting you drunk, it’s your body’s reaction to it. If you put alcohol into a dead person, it doesn’t do anything. It might preserve them…it’s probably the best use of alcohol out of everything – preservation. It’s the natural biological process that goes on when you put alcohol into your body. The alcohol gets into your blood stream, it goes up to your brain, it goes into your liver, it goes wherever and it interacts with your natural chemical processes that are going on – that’s what’s making you drunk. It’s all of them alarm bells going off inside your body.

It’s the toxic event what’s happening inside your body is basically the biological version of action stations. Your body is just going mad, it’s like “What’s happening here, we’re being invaded by this toxin.” But, you keep pouring it in. And the more you do it, the more the habit grows. Your body has to adjust to this. It starts to see the alcohol as being a normal thing, this is gonna be happening all the time so it starts to adjust itself up. That adjustment means that you’re getting addicted to it. It means that you need more and more and more, all the time to get the same toxic buzz that you were getting in the first place.

When you think about it, it’s physically impossible for you to become an alcoholic if you don’t put it inside yourself. I mean, it’s physically possible that somebody can capture you, tie you up in a room and force alcohol down you for years on end and then you become an alcoholic, but it’s not very realistic now is it? The thing is with quitting drinking is to just stop looking for reasons why you can’t do it instead of look at all the reasons around you why you should do it. It’s the same with any part of your life – looking at things, looking at reasons why you can do something, why you wanna be able to do something.

It’s Part of Us All

So at the end of the day we all do the same thing, moments in our lives when we all try and look for the easy way out, we all sort of blame something, blame somebody. We all find excuses and reasons why we can’t do something. We all have that thing in our lives, that’s just the fact of it. But it doesn’t lead us anywhere. It doesn’t get us anywhere, so really we have to look at what we’ve got, look at what we were born with, the gifts that we were given.

There’s always, always somebody that is worse off than you. There’s always somebody that’s got more than you. There’s always somebody who’s got more money than you, bigger car than you want, bigger house than you want. But there’s always people that have got so much less. I remember growing up and watching the Live Aid gigs and seeing all those images on the TV of Bob Geldoff and all that crew…seeing all the images of the kids in Africa starving, skinny and…it’s just horrible. You see the same thing around you now, it’s just everywhere there’s people around that are far worse off than we are in the West and they’re probably not bitching and moaning half as much as we are.

I should put a video up on the website of this guy with no arms and legs [James Vujicic] . I tell you, it’s one of the most inspiring videos I’ve ever seen. This guy was born with literally no arms at all, and one stump I think for a leg. Just have a look at it, it’s a very inspiring video. If you’re not inspired and if you’re not moved emotionally by this video, I tell you: You’re a hard bastard.

Where I’ve made excuses in my own life, I’ve made every excuse there is in the book to go out drinking. I’ve blamed everything and everyone around me just to make excuses for my own drinking. To get out to the pub or to make excuses for sitting there drinking six cans in a night. It all seemed logical at the time, but when you look back in retrospect, it’s all madness. Pure madness.

Take Responsibility – If Only For Yourself! 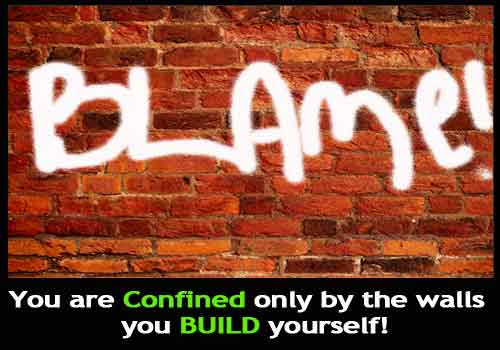