What Comes Next After You Stop Alcohol?

by Kevin O'Hara | Questions, What to Expect | 3 comments

What Comes Next After You Stop Alcohol? Transcript

I’m Kevin O’Hara for Alcohol Mastery and today, I want to talk about what’s next, what comes up next after you’ve stopped drinking.

You know, I get a lot of people and they say to me when they found out that I don’t drink, their voice goes up a tone and they just say to me,

“What do you drink?”

And then when I tell them that I only drink water, it goes up another notch…

It’s as if I’d just told them that I drink acid or something. It’s the strangest thing.

Once you understand where these people are coming from, where the alcohol drinkers are coming from when you tell them that you don’t drink and that you only actually drink water, the first reaction is that they think that you are a complete alcoholic and that you can’t ever touch an alcoholic drink again. They can’t get that you just don’t want to drink anymore, that you’ve had enough of it and you want to move on.

Since I was 18, the whole thought of socialization has always been about drinking. You know getting into the pub and basically I just didn’t know what else to do. That was just the way I was brought up. I’m not saying that everybody that was brought at the time, or even had the same influences. But you tend to stick to the people who are the same as you, who think the same as you. So when you’re young, it can seem that everyone has those influences, that everyone wants to have a drink. That sort of carried on throughout my life until a couple of years ago.

It took me a while to sort of realize that it wasn’t really the alcohol; the alcohol had nothing to do with it once I stopped. The alcohol only stays in your system for 2-3 days. Give or take a day or two, within half a week, the alcohol is not influencing you anymore. The problems that you have with recovery are either because of the consequences of what you’ve done to your body through drinking, depending on how long you’ve used alcohol, and the holes and the gaps in your life that are now very apparent.

All the times that you’ve used alcohol… in my life it was just such a… it became such a big part of my life… no matter what I did to enjoy myself… any other time that I wasn’t working I was thinking about drinking. So, when you get to that stage there’s a big chunk of time that needs to be replaced once you stop drinking and that’s where the problems lie.

It’s not insurmountable; I mean this is all about changing your life for the better. You’re taking alcohol out and you’re just doing better things with your time, instead of sitting and drinking.

But the beauty of this way of looking at things, instead of focusing on the alcohol and focusing on the gaps instead, is that you get to fill the gaps with whatever you want, it’s up to you. It’s your choice.

Quitting drinking in this sense, is like drawing a big line and with the sand in front of you and stepping across it. You know you’re focusing on the journey ahead.

The people that have most problems with in this line of reasoning, is because they can’t figure out exactly what else to do, they get lost in their past and in facing backwards. They find it difficult to move away from the alcohol and get the alcohol out of their minds. It’s understandable but it’s a mindset, it’s just a perception. And once you get over that perception, you’ll understand that alcohol was never doing you any good. It was just holding you back from all the good things in life. You’re going to be in a much better position. So that’s just a way to look at things.

It’s really one of the ways, the reasons why I sort of try to encourage people not to quit drinking straight away until they have a plan of attack, some idea of they’re going to do. And to sit down and do that before you’re stressed out with thinking about your missing alcohol.

It’s an easy thing to say and it’s difficult to get your head around it but once you do, once you figure out what you want to do, what you’re long term goal is, you’ll have something to aim towards. If you step out of your house, head out on a vacation without knowing where you’re going to go, you’ll probably going to end up going around in circles or you’re going to get hopelessly lost. So having a plan, knowing exactly where you’re going to go gives you that big direction that you need.

So, if you have any questions about that give us a shout over on the website and sign up for the newsletter if you haven’t done that already and until next time, I’m Kevin O’Hara for Alcohol Mastery, onwards and upwards.

What is Recovery?
What Are Your Reasons To Drink?
Why Do We Need More Alcohol? 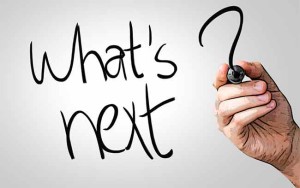