Quitting Drinking Alcohol at Home | Is It Safe For You? | SDA27

This is week 27 of my journey into alcohol mastery! This week’s video is about how I can help you. I talk about watching a documentary about a young man dying from the effects of drinking 3 pints of vodka a day. That got me thinking about exactly who I can help. I can only give help from my experience. I’m reading a lot, looking for information and knowledge anywhere I can find it, but there’s only so much I can say. If you have a serious addiction to alcohol you need to get medical assistance before you quit and during your quit.

What do I mean by ‘serious addiction’?

In my opinion, anyone who has a serious addiction is a person who cannot stay off the drink for a day or two without getting significant side effects.
If, like me, you were able to control your drinking to a certain extent, you should be fine to quit without medical intervention.
Again, I can only go on my own experience. I could go for a few days without drinking. My only side effects were I found it hard to go to sleep and would sometimes get a bit shaky. My symptoms were for the most part in my head, because of the habit.

If you are in doubt, go to your doctor.

Today I wanted to talk about who can go about this quitting alcohol at home stuff, without having to go into some form of treatment or get medical treatment, that kind of thing.

The reason I’m talking about this is because I watched a documentary a couple of days ago. (link here)
It was about a young lad, he was under the age of 30.
He died from being an alcoholic.

He was basically drinking, I think it was the American 3 pints of vodka a day.
He was drinking a lot of stuff.
He basically couldn’t function without drink.

I’ve No Experience of Constant Drinking 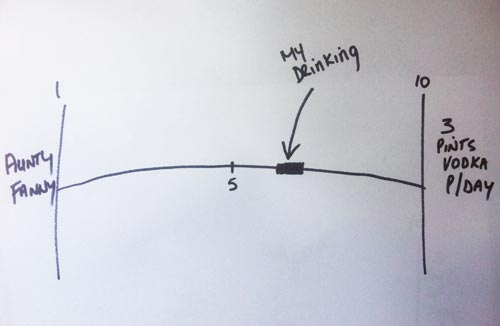 Who Can I Help?

I’m basically here to try and help out people who are in the same position that I am.

The 10 is this guy drinking 3 pints of vodka a day and he just can’t function.
That’s his whole life… he lives for drinking.

At the other end of the scale is Great Aunty Fanny who has a sip of sherry at Christmas.
She really doesn’t like it, but she wants to get into the spirit of things.

Where I was… about a 6 or a 7.
I didn’t drink every day, but I looked forward to a drink, and when I did drink that was it… I couldn’t stop.

I’m not trying to be flippant, but if there’s a serious risk of serious harm to you, then you need to get it sorted out by a doctor, you need to go to a doctor.

Should You Be Quitting If You’re at #10

I think anybody who has an alcohol problem has got the capability of quitting.

But the higher up that scale you are, towards that number 10, you’ve got to seriously think about getting medical treatment.

For your own safety!

There’s a lot of stuff that can happen if you’re that addicted to any substance.

Just coming off it is very bad for you.

What most of us need to do is to just stop drinking, and we’ll be fine.

It’s as simple as that.

But if you think that there’s going to be any danger to yourself, you really need to go to a doctor.

Just for your own piece of mind, just do that.

That’s stop drinking alcohol week 27.
It’s a bit short this week, and it’s a bit late, I just had a lot to do this week.
It took me a while to get it done.
I’ll do another one in two or three days.
…. on a lighter subject!

So until then…
My name’s Kevin O’Hara for Alcohol Mastery…
Onwards and upwards!