These questions were written in the 1930’s so I think the question: “Is drinking making your home life unhappy” is a bit tame by today’s standards.

Some of the alternative and more pertinent questions are:

It’s All About the Children

Alcohol abuse in the home often has the greatest impact on innocent children. Many of them are not yet old enough to understand what’s going on, they don’t get that their parent is abusing a drug, they only see the consequences.

Children can miss out on school time and many other fundamental learning experiences because one of their parents is a drunk. 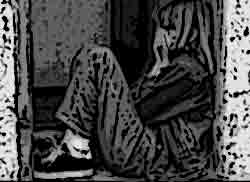 They can suffer psychological problems because of instability from drunken parents…they can be anxious about what’s going to happen next, or fearful of doing something wrong, blaming themselves for their parents behaviour…

In some cases, the children may have to take on the responsibilities of the parent when that parent is absent (physically or mentally).

Although levels of verbal violence may increase, in the form of shouting or insulting behaviour, physical abuse levels aren’t usually affected by alcohol abuse. Either a person has a violent tendency or they don’t. Alcohol does not in general cause an otherwise passive person to become violent.

It is also a fallacy that alcoholism is only a problem amongst the poorer parts of our society. The middle-classes also drink too much, have alcohol problems, and problems in the home as a result.

In his book “The Sophisticated Alcoholic”, David Allen, a British therapist, says that the middle-class Mr and Mrs Normal don’t really see themselves as having any alcohol related issues…

“But they are drinking excessive amounts of alcohol — well above the recommended limits. They drink in an organised and managed fashion. They’re not the ones who crash the car because they were drunk but they do have an alcohol problem.”

In some homes, there might be money problems and alcohol problems. These families might be doing without proper nutrition, new clothes, light and heat, etc. because the money is being spent on alcohol instead…

The Elephant in the Living Room

I was never a bad drunk, I was one of those drunks who would laugh if I was with other people and cry when I was on my own.

The elephant in my living room was the belief that there was ever going to be a normal way of drinking for me. I was raised in Ireland and England, and was surrounded by a type of alcohol culture that revelled in the getting drunk. I suppose that’s really the point, if the truth be told. Many people truly believe they’re doing it for the taste, the bouquet, the deep velvety richness, or the full bodied voluptuousness of that particular vintage… remember the ‘Emperor’s new clothes”?

When drunk, my moods would often get quite argy-bargy. I always came across as the boisterous practical joker who loved laughing at the ludicrous. The loud laughing, thigh slapping, joke telling, and raucous nature went down well with blokes, but not too good with most women. I would often have digs at my partner, that sarcastic humour didn’t really come off as particularly funny to her at all.

When I was drinking on my own, I would always begin by watching a movie. I’d soon get bored with that and stick on some iTunes. The music usually started out fairly jovial but I’d nearly always end up playing sad songs, as the mood got more and more maudlin, emotionally silly with drink…

More often than not, I wouldn’t remember having gone to bed, waking the next morning to begin nursing another day or two’s worth of hangover. Sometimes I’d be told some of the things I’d said the night before, rarely could I ever remember saying them.

Are You the Woodsman or the Big Bad Wolf?

All families have problems; they come in all shapes and sizes. But trying to run away into the bottom of an alcohol bottle is never going to provide any solutions.

Family is family, Father’s should be heroes and Mother’s the binding force that holds the family together.

A child should be able to look at their father in the role of the woodsman, the strong and valiant hero that will always save them when the big bad wolf comes to eat them. Children of alcoholics often see their father’s as the beast, or worse an incarnation of the two… a Jekyll and Hyde character, first the woodsman, then the big bad wolf with the smelly breath come to eat them.

I’ve put a couple of links to PDF’s about alcohol and the family below the post. If you have any questions or comments, you can leave them below in the text box. Or, you can use the contact form at the top of the page.

Thanks for visiting the site.

Download a copy of the transcript from the video:

If There’s Drinking, Drugs, or Violence at Home: What Youth Can Do….Information Sheet Download

Abuse Among Parents With Children Living in the Home