What do I Mean, I still think about drinking? After 18 months, seriously! It’s not as bad as it sounds.

Does that mean I’m really an alcoholic?

Of course not. Compared with the amount of times I used to think about drinking when I was drinking, virtually all my waking hours, it’s nothing. The thought might cross my mind of what if I had a sip, or maybe just the one, or that smells nice, or some other type of bollocks.

Acting Out Every Thought!

You can’t control what thoughts pop into your head. You can and must control what you do about them. Thinking about something doesn’t mean you have to follow through with every thought that pops up, no more than you would immediately act on any desire or impulse that formed in your mind. Think about the consequences if you acted out every time you wanted to punch someone in the face.

Everyone Thinks About Drinking At Some Level

I presume that people who have never had a drink problem still think about drinking. I would even presume that a person who’d never drank a drop of alcohol in their lives still thinks about what it would be like to take a drink every once in a while.

I can use it as a timely way of seeing how far I’ve come. I can have a private gloat to myself, a little virtual clap on my shoulder, or a little look at other people and the way they are still living with the brainwashing. I know that might sound bad, gloating at other people, but it helps me

What Brings It On The Drinking Thinking?

Normally the context will set of the drinking thinking. But it’s also heavily linked with the brainwashing. Someone will say to me “Are you still not drinking?”. Or, I’ll see someone putting their nose into a glass of wine and listen to them talking shite about the bouquet, or the heady nose, or the deep rich oakiness… of course, everyone’s a wine expert.

The one that always cracks me up is when you’re sat in a restaurant, the waiter comes over with the cork for the ‘head guy’ at the table to take a good long sniff at! How ridiculous does that look? How utterly pompous and contrived!

Another one is the look on their faces as the waiter pours that little drop into the glass. They take a little sip, move it around their mouths, some of them even do the sucky thing, all they’re short of doing is the big golly on into the bucket. Then they give the waiter the knowing nod of acceptance. I feel like bellowing “BOLLOCKS!!!!”

So, the brainwashing runs deep and is hard to totally eradicate. We’ve all been indoctrinated into this alcohol society since the day we were born. Every part of our lives has a seam of alcohol running through it, each celebration, each party, each good moment seems to need an alcoholic collaborator.

Another thing that can bring it on in me is if I’m having a stressful moment, or just a bad day (we all get them). These are coming fewer and farther apart, both the stress and the thoughts of drinking through the stress. Again, they’re momentary. Mere fleeting thoughts that are only recognisable because I don’t drink any more, and because I wonder why I’m still thinking about drinking as a solution to anything.

Is It Bad To Think About Drinking?

No, not at all. I can’t help it, so why should it be bad. What would be bad would be acting out on the thought. But I’m not afraid of it because if I was going to act out on it, I’d have done it a long time ago.

The Meaning of Drinking

Another point is that the word drinking has stopped meaning alcohol to me. I drink all the time to cure my thirst or prevent myself from dehydrating. I mostly drink water. Sometimes I drink tea, coffee in the mornings, and on the very rare occasion I’ll have a glass of coke as my treat. The point is that when I think of drink I think about it in terms of how we are supposed to think about it.

Will I Ever Stop Thinking About Drinking?

I don’t know, I doubt it. As long as there is alcohol around me I will think about it. Does it matter if I never stop thinking about it? No. I have had a lucky escape. I could still be drinking.

Should You Try To Suppress Thoughts of Drinking?

So, there’s no way you can stop yourself from thinking about something, especially if you try.

I guess, in the end, the advice is don’t worry about it. These are not strong feelings, they have no power at all. I’m not about to throw everything I have achieved in the last 18 months down the toilet because of one momentary itch. It’s not a monkey on my back, it’s not a craving, it’s not me truly being an alcoholic. It’s a passing whimsy. 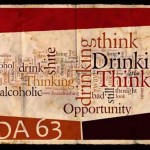