How I Feel After My First Year of Quitting Alcohol

How I Feel After My First Year Quit (Transcript)

Hi, how are you doing, I’m Kevin O’Hara for Alcohol Mastery and today I’m going to be talking about, how I feel after, one year off the alcohol.

The basic answer is I feel great, I feel absolutely wonderful!

I’ve lost an awful lot of body weight, the weight that I’ve put on over the lifetime of my drinking. Not only from the drinking but eating crappy foods and just being generally lazy because I’ve been too lazy to go out and exercise and only working when I have to work that kind of thing.

If I had to put a figure on it, I’d have to say I feel 10 years younger. I know it’s a fairly arbitrary number but, I can’t really gauge what I felt when I was 37, because I was a drinker. I can’t gauge what I was when I was 27 because I was a drinker, so I’m gauging everything now on how I feel now at the moment and what I felt like this time last year, and I well remember that, gathering up for Christmas and getting all the alcohol in, and just being knackered basically, knackered with everything.

Putting a figure on things like that, like I say is fairly arbitrary but I feel physically better than I’ve felt in a long, long time. I think if I asked, if I thought about it, whether I’m a hundred percent, if I feel 100% better, if I feel a 100% fit now, I don’t think I’m there.

Really, I’ve done a lot of the damage over the years. There’s no getting away from that but I’m quite willing to accept that. I got out in time, as far as I’m concerned, I got out before there was any big life threatening damage, before I was forced out, because I had something wrong with my body, so I consider myself enormously lucky.

Basically I was the one who was opening my mouth and pouring it in, time and time again, so I can’t blame anybody else except myself. In all those years that I was drinking, I might have been cagouled a few times, been taken the piss out of, and people saying, “yeah come on, have a drink”. But at the end of the day, no matter how much anyone sort of gave me a ribbing for not drinking, every time I did drink it was purely my own fault. So, I take responsibility for that.

Stronger Because of Drinking!

In my mind I feel a lot stronger because of quitting drinking, but I feel stronger because, I was drinking in the first place and because I’ve gone through that. I have read a lot of books from people, who claim to know about drinking and try to tell you about what it’s like, about addictions and all that kind of stuff and they’ve never had an addiction in their life.

We Just Have One Life

No matter what I do with my own life, I only have one life and that’s all there is and regardless of what I’ve one to my body in the past, you have to move on, you have to accept that that is part of your life.

Learn whatever you can from it, it’s a learning [process], you only learn really from experience and you’ve only got one life to experience so, it’s a question of learning from it isn’t it.

It’s one of the facts of life, it’s a fact of being human, we go through life thinking that most of the time we’re right. I remember 16, thinking that I knew everything and nobody could tell me anything different and I still think that. It’s only when you learn from hard experience that it’s not necessarily as you thought it was, that’s when you start to learn. A dentist once told me years ago, that there’s a certain type of person that will only come to a dentist when he’s got toothache and once the toothache is cured, he won’t go back again. I was one of those people, I think I still am really you now, I hate the dentist. But that’s human nature, so I really do think that I’m profiting from my addiction, from my years of drinking, because I’ve chosen to look at it in a positive light. I think if you don’t do that then you are not learning anything.

The Sensation of Knowing That You’ll Never Drink Again

I do feel stronger in my mind since I’ve quit. As far as spirituality goes, I think I spoke a bit about that in another video that I did last week, it’s a very personal thing, it’s intensely personal and it’s very subjective as well. I think I sort of lost any spirituality that I had when I was 16 or 17. I’m not saying that was anything to do with the drink it was just something to do with the church I was brought up in. Since I’ve stopped drinking I’ve started to think a bit more about the spiritual side of my life, what different things mean to me, what exactly I do believe in or don’t believe in.

In summary, the first year I am off alcohol, I feel absolutely fantastic. When I quit last year I didn’t really know what to expect, I certainly knew that I had to quit and that I was heading down a wrong road. if I didn’t stop at that time, I’m not saying I’d never have stopped, but I was just going somewhere where I didn’t want to be. I’d moved country and I think I’d have tried to seek out more drinking buddies over here, that kind of thing, I didn’t want to do that.

I didn’t understand for the first few weeks how utterly sure I was of this thing, I didn’t get the…I really felt really sure I was never going to drink and I knew, I was never going to drink again and I couldn’t figure that out it took me a long time to actually realise, why that was. And to be honest I haven’t got there a 100% I’ve got an awful lot more to learn. I’m reading a lot of stuff and talking to a lot of different people about different types of addiction not just alcohol, because I think they all stem from the same fundamental source inside. So I’m really, really looking forward to next year to what it might bring, I can only look at it from where I am now.

So if you have any questions at all, go to the website and leave a comment there or as I say on YouTube, leave a comment down below. Don’t forget to subscribe to the Newsletter, it’s over on the website, in the sidebar, it’s absolutely free, won’t cost you a penny. 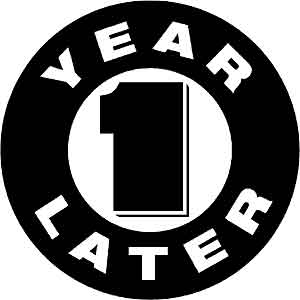