Have You Lost Time From Work Because of Your Drinking?

The first of the “Johns Hopkins 20 questions: Are you an alcoholic” is:

Have You Lost Time From Work Because of Your Drinking??

I’m not going to analyse the questions too deeply in this series of posts. I think they’re self-explanatory for the most part. I’ll just give some background info and a few stats, and I’ll also tell you a bit about my own experiences with each question in turn.

Is Your Work Suffering?

If your work is suffering because of your alcohol problem, you could lose your job or worse. Depending on what you do for a living, the consequences of you being under the influence of alcohol at work could be catastrophic. You or someone else could be injured. You could be killed! In the worst case scenario, your drinking could cause the death of one of your colleagues.

“A survey carried out by YouGov for PruHealth found that each day around 200,000 British workers turn up to work hung-over from the night before.”

My drink was Guinness. Each pint of Guinness contains 2.3 units of alcohol. The average person breaks down one unit of alcohol per hour. If I drank 10 pints…10 pints x 2.3 units per pint = 23 hours before all the alcohol was gone from my system. Most times, I couldn’t tell you how many pints I’d consumed. Often it could be 20. That’s almost 2 full days and 2 full nights before the alcohol was all gone from my system. I drank almost every day, so many times when I was going into work the next day with a “hangover”, I was still under the influence…

You are twice as likely to die from an alcohol related disease if you work in a bar or restaurant in the UK, higher than most other professions… 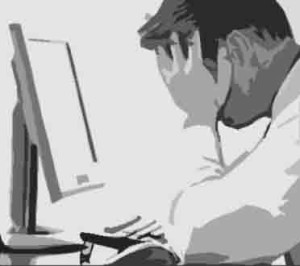 Close behind in the statistics are the male dominated manual labour type jobs such as construction, carpentry, flooring and tiling, labourers, seafarers, and butchers, etc.

Farmers and those who drive for a living are amongst the men who are least at risk. Another low risk group are managers.

If the workplace is female dominated, the risks are also much lower.

Some male dominated work places will turn a blind eye to heavy drinking, others will actively encourage it…a meeting at the local bar after work, which can often turn into a session until closing time or beyond.

Ask Yourself These Related Questions

…and My Days of the Hangover

Throughout my drinking/working life, I have lost an unbelievable amount of days work and an uncountable number of hours because I couldn’t do the job as I was hung-over.

I’ve worked for myself since I was 16, so I was never going to get sacked. I lost a few clients alright, but for the most part I could excuse myself, telling those customers that I was ill, and that I would be there the next day or the day after that.

Much of the time, I’ve had lads working for me, so I could pass the actual work over, while I went off for a sleep or to the pub for a ‘hair of the dog’, telling them to get on with things and I’d see them the next day…

I worked in forestry and it’s a pretty dangerous occupation at the best of times, with the chance of becoming deadly when any alcohol is involved. So, I could never risk picking up any saws if I thought I was under the influence. I always put up with lads having hangovers on the job, not really questioning myself about their ‘real’ capacity to do the work. It’s all a big laugh to watch someone suffering the bad effects from the night before. Real macho stuff, you’ve gotta suffer for your enjoyment and all that…Oftentimes, if we were working away from home, I’d be in the pub with them after work, contributing to the hangovers.

The only time I sacked someone was when they drank on the job. I hired a Scottish guy at the start of the planting season one year. I’d about 3 months work for him, with the possibility of more if he wanted. He didn’t have a car, so I told him I would pick him up at a certain place at 6.30 am. He got into the Landrover and we’d only got a mile out of town when I heard the sound of a can opening. As soon as I smelt the beer I pulled up and kicked him out. He tried to make the excuse that it was the hang-over cure…end of story… However bad I got with my drinking, I was always a functioning alcoholic, and I would never put anyone else’s life in danger. When I look back now, I realize that I had alcohol in my bloodstream at most times.

There’s some links at the bottom of the page if you want more information about work and drinking….

Leave a comment in the comment box, or leave a message in the contact section…the link is at the top of the page. Let me know if there are any questions you have or any topics you’d like me to cover.

Until next time…
Onwards and Upwards
Kev

Download a copy of the transcript from the video:

Do You Lose Time From Your Work Due to Your Drinking Video Transcript.

Are You an Alcoholic? The Johns Hopkins 20 Questions (Introduction)