Do You Drink Because You Are Shy Of Other People?

A Big Question: Drink Because You Are Shy?

This is the third question of the Johns Hopkins 20 questions: “Are you an alcoholic?” and it covers if you ever drink because you are shy of other people

This is one of those questions which, in my opinion, if you answer yes, you already have an alcohol problem. And it’s a problem that will only get worse and become much more difficult to handle the longer you leave the underlying causes unresolved.

If you’re taking any drug to help you deal with life you’re gonna have problems.

“Many a man is praised for his reserve and so-called shyness when he is simply too proud to risk making a fool of himself.”
J.B. Priestley

Why are we always looking for the easy way out? We want that magic pill so we can lose weight without having to get our fat arse’s off the couch to exercise, while still being able to chomp down on cream doughnuts and burgers.

When we get ill, instead of looking for the reasons why we’re ill and dealing with the causes, we want to take a pill that makes the symptoms go away. We are addicted to the easy way out of everything.

Shyness will never go away if you don’t deal with it head-on! 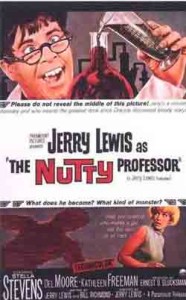 Remember the 1960’s version of “The Nutty Professor” with Jerry Lewis. He was the bumbling, buck-toothed, shy professor who invented a serum that turned him into a Dean Martin like character. Buddy Love was a cool character, but he was quite despicable. The moral of the movie was… you can’t expect anyone else to like you if you don’t like yourself.

Drinking to try and change your personality is like a Dr Jekyll and Mr Hyde scenario. Jekyll created a potion to repress parts of himself that he didn’t like. Instead, the potion turned him into the younger, more aggressive, and animalistic Mr Hyde, a despicable little bastard. As the story unfolds, Jekyll needs more and more of the potion to remain himself.

Most of us don’t turn into Mr Hyde when we’ve been drinking, but we all transform into lesser versions of ourselves. We wake up the caveman, that reptilian part of our brain that deals with our most basic wants and needs… the thinking brain gradually gets pushed into the background.

My Trip Over the Sahara

When I first started drinking, 3 pints would be enough for the whole night. Before I gave up drinking, I needed to drink 3 pints before the night even got started, before I was “up to speed”, able to relax and enjoy myself. And once I started, I couldn’t stop.

When I knew we were going out with others, I would always arrange it so that I would be there a half hour or an hour before everyone else was due to arrive, even if it was my family. The first pint would be thrown down my throat like I hadn’t had a drink in days, like I had just crawled across the Sahara desert to be there. And that was always my excuse for drinking the first one so fast…”I was really, really thirsty”… not that I was a bit scared and needed my crutch.

I never realized how much fun you can have when you’re sober. I can really get into a conversation. I listen more, I understand more, I remember much more, and I really enjoy myself. I haven’t got a little golem trying to trip up my life on every turn.

Part of the Drugged Up Culture?

If you drink because you need Dutch courage, you have to start dealing the shyness as a problem. Don’t hide away from it. Everyone feels shy sometimes, you’re not alone. But by not dealing with it, or preferring to be drugged in order to socialize, you are digging a deep hole for yourself, one that’ll be very difficult for you to climb out of.

This article is part of a series posts on the Johns Hopkins 20 questions for ascertaining whether you have an alcohol problem or not. If you answer yes to this question and yes to some of the others in the test, you need to take a look at your drinking habits. You can find the master article here:

Have You lost time from work because of your drinking?
Is Drinking Making Your Home Life Unhappy?