Am I a Potential Future Alcoholic?

This is an answer to a question posed on YouTube by Jonathan Doyle, Am I a potential future alcoholic.

Here’s the gist of the video and some final thoughts.

First of all, thanks for leaving a comment, and no it doesn’t sound stupid. Unfortunately that’s just a big problem with alcohol. It’s addictive, both in terms of the effect that the alcohol has on your system and because people get used to drinking, it becomes a habit.

I started drinking when I was in my early teens. I couldn’t stomach much in the beginning but I soon got used to it. I remember always trying to push the limits. How much could I drink compared to how much my mate could drink or how much the adults could drink? It doesn’t help when you’ve got so-called intelligent grown-up blokes telling you that the amount of drink you can get down in a night is just a start for them. They wear it like a badge of honour. I’ve been guilty of this one. It’s no honourable thing to admit that you can drink 20 or 30 pints in one sitting. Badge of honour, my arse. Badge of shame more like!

My son is your age and I wish he’d quit drinking. I really don’t see anything good in it at all. I know it’s easy for me to say now that I’ve quit but there you go. My son is caught up in the same mad drinking culture that you are, that I was all my life.

This is a fantastic world we live in, despite what the media would have you believe. There’s lot of opportunity out there, regardless of what you’re age, but especially at your age. My advice, for what it’s worth, is get away from alcohol altogether. You’re on a uphill struggle trying to control drinking, especially when you live in a culture that so heavily involves drinking.

Ireland is the top recorded consumer of alcohol in the world and comes second in total of recorded and unrecorded. Part of the reason I moved away from Ireland was to get away from that drinking culture. It was literally killing me slowly. I chose to move to Spain. Although they drink here, it’s about 60% of Irish consumption, and the Spanish drink differently. I’ve lived here for almost 2 years and I’ve yet to see a pissed Spaniard. I’m not saying it doesn’t happen, I’m just not there when it does. I remember back in Ireland, if you were in any town on a Saturday afternoon you’d see one or two who’d started early. It’s just the intention. Having a good time = drinking.

So, don’t be ashamed of drinking. It is part of the culture. At the very least you’re asking questions, that’s the first step. Hopefully you realize, sooner rather than later, that drinking is not going to give you anything but poison.

I can’t give you any direct advice about controlling your drinking because I haven’t any experience of being able to do it myself. I would stop for a few days, sure enough, but then I’d drink like I was catching up. The only way I was ever able to control my drinking was through abstinence. Eventually, I knew the only way for me was complete abstinence. Every day I am grateful that I made that choice. There are many, many people in the same boat.

I wish you all the best Jonathan! 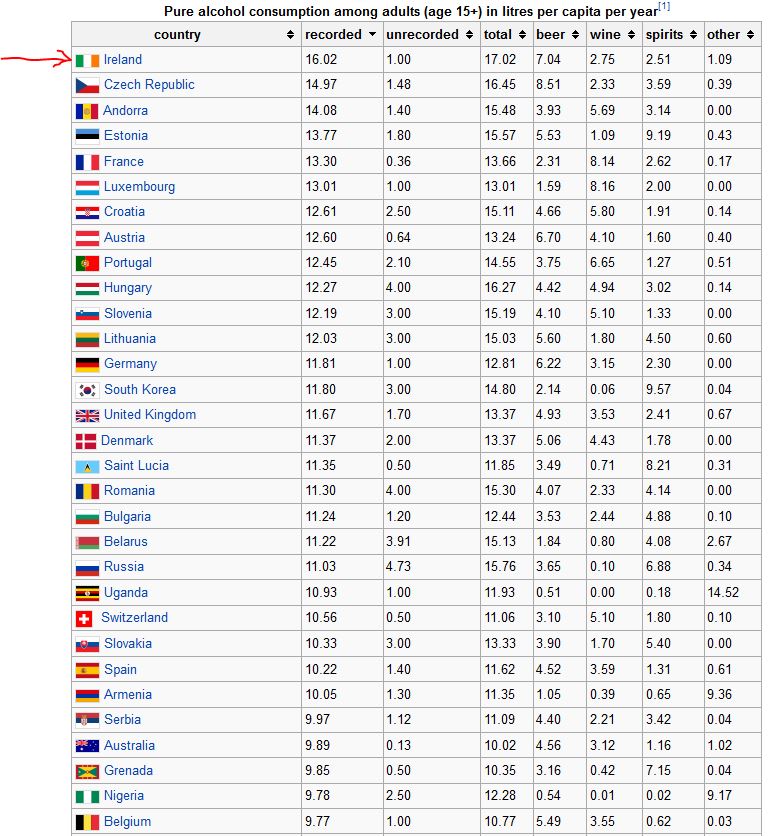 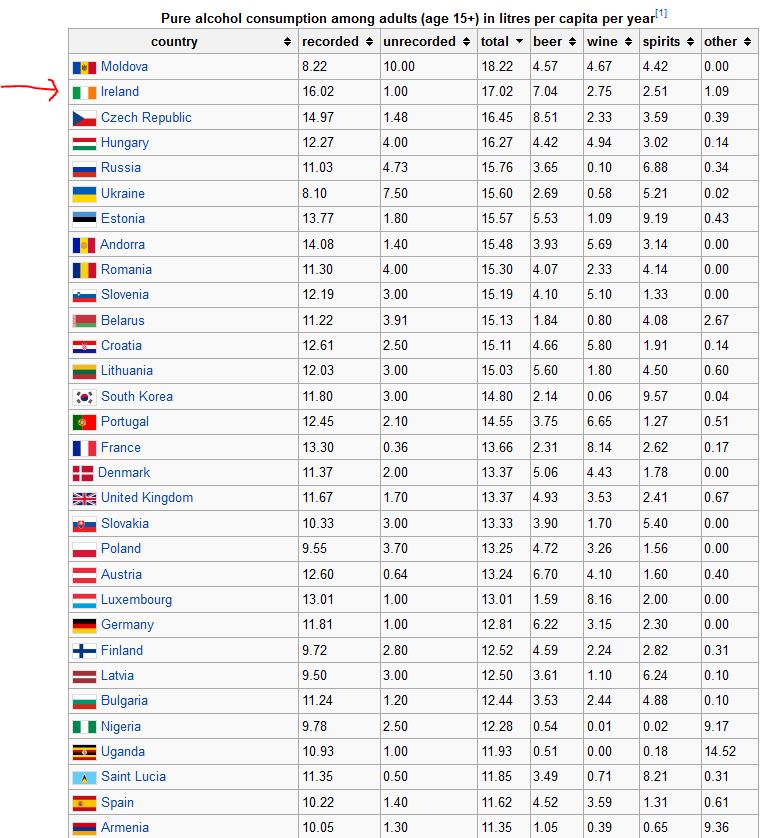 Both charts thanks to Wikipedia.

Do Alcoholics Have to Drink Every Day?
What is Drinking Too Much?
How Long Until You Could Watch Others Drink?
The Alcohol Cravings Will Be Over Soon!