Alcohol Withdrawal Treatment | Do You Need it Before Quitting Booze?

Alcohol Withdrawal Treatment: Do You Need It?

I’ve written a few articles about alcohol withdrawal in the past. For the most part, I think I have managed to get my message across, that this is a habit, the vast majority of people with an alcohol habit stop drinking on their own, so the likelihood is that you can quit drinking on your own as well. I get some criticism for saying this by those who have gone through a bad time or those who are worried that I’m sending out the message that you quitting alcohol is never dangerous. I’m not out to criticism, but this is a subject that I will continue to revisit because of the huge amount of disinformation that is out there about alcohol withdrawal and whether you need alcohol withdrawal treatment.

To begin with, I’m not a doctor, this video is not medical advice, so it shouldn’t be viewed as a replacement for being careful and paying a visit to your doctor. I just want to help you keep an open mind to the fact that you can affect your experiences by how you think about quitting drinking and the types of feelings, physical and physiological, once you do stop.

With that in mind, do some people need treatment for alcohol withdrawal? Most definitely yes! Make no mistake, some people have created so much damage and destruction within their bodies that it is very dangerous to quit without specialist medical help. No amount of positive mental attitude, changing the ways you are thinking, altering the words you use, and so on, is going to overcome any serious physical damage that you may have been caused for yourself.

For instance, damage to your liver is damage to your liver. It can be caused through using drugs, eating the wrong foods over a period of years, or through diseases like hepatitis or hemochromatosis – an inherited disorder which involves the body absorbing and storing too much iron. In the same light, a broken leg is a broken leg. It doesn’t matter if the leg has been broken in a skiing accident or a car crash, it has to be treated like a broken leg. Both the damaged liver and the broken leg are medical conditions.

The doctor cannot prevent you from breaking your leg again, you need to get skiing lessons or learn how to drive safer. If you are lucky enough to have successful treatment on your liver, the doctor cannot prevent you from causing further damage. You have to change your lifestyle, your habits. It’s nothing to do with medicine. I know there’s the argument for medication to help you stop drinking, but that is not helping the underlying habit.

The majority of people who come to the Alcohol Mastery website, those post on the site or on YouTube, and those who frequently send me emails, are people who are quite capable of handling this habit on their own. Sure, their habit may have gotten a bit out control, but for the most part they understand that something is wrong.
Also, by the time you comprehend that you are having a problem with alcohol, for the most part this is still a long time before any serious damage has been caused.

Your body is absolutely capable of dealing with most toxins, even the massive toxic burden from constant alcohol use. But there is only so far your body can go, there are limits to its capabilities. Having said that, your mind and body will let you know that something is not right, that there needs to be change. It will provide you with big obvious signposts. It doesn’t give you the warnings when it’s too late, how stupid would that be… here is your body, doing such a great job a keeping you alive, but at the same time it’s keeping the damage a big secret??? It lets you know well in advance.

Your body is letting you know something is wrong while you can do something about it. That’s what all pain is about, a physical alarm that you’ll find very difficult to ignore. Very few people persist with naive drinking past these warning signs. Once you start to get these warnings it’s difficult to create more and more damage or not do something about it. The fact that you are listening to me, or people like me, or searching for information, is plenty of evidence for that. By the way, not only am I telling you that you can get rid of this habit, I’m telling you that once you get alcohol out of your life and learn some new skills to replace the tool of alcohol, you won’t recognize the person you will become or how good you will feel.

According to the website patient.co.uk*, “If you are alcohol-dependent you have a strong desire to drink alcohol. In addition, your body becomes used to lots of alcohol. Therefore, you may start to develop withdrawal symptoms 3-8 hours after your last drink as the effect of the alcohol wears off. So, even if you want to stop drinking, it is often difficult because of the withdrawal symptoms.”
Can I ask you a question?

You have been drinking for a while, right?

What does that last sentence sound like to you? You develop withdrawal symptoms 3-8 hours after your last drink as the effect of the alcohol wears off. What normally happens after you have had your last drink? You go to bed, right? So 3-8 hours after you go to bed, you probably wake up again. I know that’s what I used to do anyway. I would wake up in the middle of the night feeling like crap, dry mouth, headache, shaking, badly needing to pee. We generally call it a hangover!

The website goes on to say, “Withdrawal symptoms include: feeling sick (nausea), the ‘shakes’ (trembling), sweating, craving for alcohol and just feeling awful”… like I said, a hangover.

Check this out for yourself.

Type the words alcohol withdrawal into Google and see what comes up. The articles and videos are mostly describing what we know as a hangover. But when it’s called alcohol withdrawal, the same symptoms become very serious. The focus is on the danger and on getting medical treatment. If you do the same search, typing hangover, aka alcohol withdrawal, you’ll get a lot of manly-type posts… how to overcome a hangover, 11 ways to ease a nasty hangover, 7 natural hangover remedies that work. Two polar opposite approaches to the same problem.

The hangover that you get after a drinking session is a form of alcohol withdrawal. You’ve become so used to the process of hangover that you don’t give it a second thought any more. You certainly wouldn’t visit your doctor every time you got one.
Why am I telling you this? Because you have been going through alcohol withdrawal for a long time, you have just been calling it by a different name. This goes back to the dangers of the language that we use. If we called our morning hangovers by what they really are, severe alcohol withdrawal, maybe it would cause us to be a lot more concerned than we actually are. But alcohol withdrawal sounds too much like something a druggie would have, or an alcoholic.

During my worst hangovers, I always found it very difficult to drink more alcohol so seeking out more drink wasn’t normally on my agenda. That was until the pain wore off and my habit kicked in.
So, if you’re a drinker, you are already going through some form of regular alcohol withdrawal. It’s part of the cycle, drink, intoxication, withdrawal.

How do you know when you need treatment of alcohol withdrawal or not?
I’ll say again, if you are worried at all… you should go to your doctor.
Over 70% of people who have stopped drinking alcohol have never had any form of treatment or help. If you have managed to quit alcohol for more than a few days in the recent past, you most likely fall into this category, you can most likely do this on your own. On the other hand, if you have not managed to quit alcohol for more than a day or two in the recent past, don’t take the risk. At the very least talk to your doctor. Don’t be a hero about this, it’s just not worth it.

To finish up, your chances of severe problems when you quit drinking are minimal. We all go through some form of alcohol withdrawal no matter what… it goes with the territory. For most of us, that withdrawal will mean nothing more than a hangover and some minor physical discomfort.

For those people, your biggest withdrawal is going to be in your head. Again, I don’t like using words like these. The word withdrawal has way too much negative baggage to describe what is really going on. For me, the process of quitting drinking, is very like a separation or a divorce.

When you go through a relationship separation, you need to change many aspects of your once shared life. As a heavy drinker, the things that you did together, you and the alcohol, you now have to do apart. It’s often the anxiety about making the necessary changes that keeps some relationships festering for years, when they should have ended a long time ago. The same basic principles also apply with stopping alcohol. Fear, anxiety, insecurity can create physical problems. In some people, those physical problems, which are brought on by the mind, can land them in hospital with the shakes, rapid heartbeat, panic attacks, and so on.

You have much greater chance of big problems if you persist in your alcohol usage. As I have said in the past, and I’ll keep repeating, many of the symptoms and side effects of quitting are about mind over matter. Stay strong and persist. Control your thoughts about what you are experiencing and why you’re doing. You will feel much less discomfort. If you don’t control your thoughts, the chances of your discomfort levels being more severe are much greater.

There are very rare cases where the damage that has been done by the alcohol consumption is so great that it is extremely necessary to be slowly weaned away from alcohol under medical supervision. But that is very rare. Bottom line, regardless of your risk, if you are in any doubt, seek medical advice. They are the only ones who can truly tell you if you need treatment of alcohol withdrawal or not. 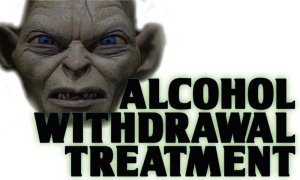