Before we get into this video let me say that if you are in any doubt about your health, you should visit your doctor.

Most of the danger in quitting alcohol is down to the years that you have been drinking the stuff, the damage that has been caused by this poison over those years, and the way your body has habitualized itself to the alcohol. If you can stop using alcohol for a couple of days without any symptoms, you are very likely to be able to quit for good with no danger to your health. Your danger comes when you continue, not when you stop. As I said, if in doubt go see your doctor. It will take you a couple of hours max.

My name is Kevin O’Hara for Alcohol Mastery and today I want to talk about a comment or a question that I got on YouTube that said, “Alcohol withdrawal is DANGEROUS. You must know that.”

My Experience – Drinking Was KILLING me!

So first of all to talk about my own experience with withdrawal, it wasn’t DANGEROUS – drinking for me was DANGEROUS.

I started drinking when I was 13, which is DANGEROUS.

And I drank all the way through my teens, which was DANGEROUS.

So, over 35 years drinking is very DANGEROUS.

I did it on my own, without any outside help.

So as of today, been off the drink now for 10 months, I’m way more a fitter person and way more healthier. I can think clearer, I’m eating better, and I’m sleeping better. And I’m having better relationships with my family, with my friends, than I ever did before. And yeah, I’m pretty DANGEROUS now.

I’ll give you some statistics here.

There’s 80,000 lives which are directly lost through alcohol every single year.

What kind of bullshit is that?

And quitting drinking is DANGEROUS?

Is the DANGER in Quitting?

Now I’m not saying that there isn’t a certain element of DANGER in for some people in quitting drinking.

I think there is.

But if 75% of people can successfully quit drinking without going to a doctor, then the DANGER is obviously not there for everyone.

That’s not who these videos are for.

These videos are for people who got problems because of their drinking.
These videos are for people that have been able to stay off the drink for maybe a day or two.
I mean a drink only stays in your system for 48 hours – at MOST.
The liver can deal with one unit of alcohol per hour.
So 48 hours, everything is gone.
If you can stay off the alcohol for 48 hours, you’ve essentially quit drinking. Even if you got back on it again, you’ve quit drinking.
So you’ve proved to yourself that you can do it.

So hope you can see the real DANGER is humans consuming alcohol. Humans quitting alcohol – there are very few DANGERs in that. People die from running marathons. People die swimming. People die doing things every day that you wouldn’t think people would die from doing. There’s DANGER in everything.

So do I know that quitting alcohol is DANGEROUS?

Until next time. My name is Kevin O’Hara for Alcohol Mastery. 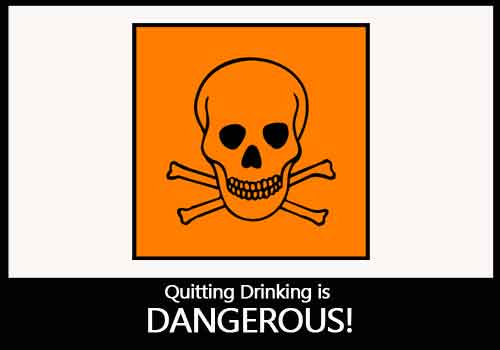